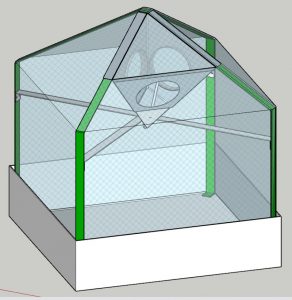 It is the top central structure of all the other products that has been taken out and set to stand with four short legs sitting within a ground basin. It is featured with one bubble generator, single layer covering and foldable top structure like an umbrella.

It is handy for DIYers to test the bubble generator, fan speed and power, water pump and spray nozzles, screen material, etc. before moving onto other structures. It is also a good tool for our salesperson to demonstrate how bubbles are produced and destroyed once they filled the entire space. 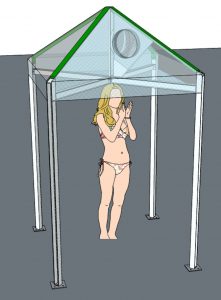 PyraPOD4 Shower (P4S), also called BubbleShower for short. The retail price can be roughly set around $1000.

It is in fact the BubbleBox with its four legs extended and only the top covering is needed. It is designed for the Bubble Fun Festival we have proposed. It can also be used as Bubble Tower so that the covering extends to the ground and the whole thing sits inside a basin. It looks spatacular during night time once you place Christmas lights in it. 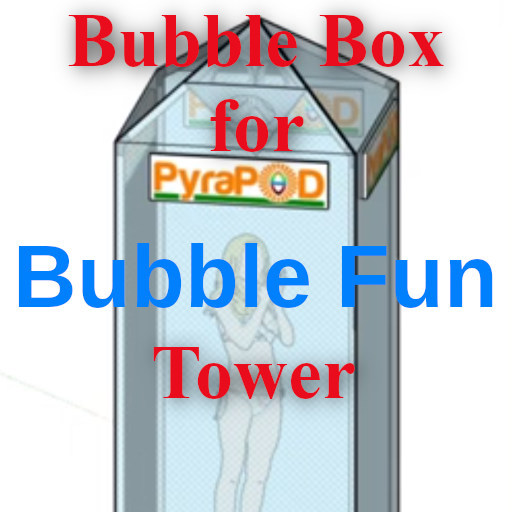 This product is essentially designed for fun – the Bubble Fun.

While we discussed it with Gregory Walker in New York for the possibility of using PyraPOD to house his sanitation invention, we find that it can also be used for full body sanitation and sterilization purpose should the Covid-19 pandemic stays with us for long – come in winter and go in summer! 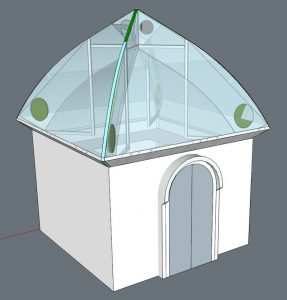 PyraPOD4 Tall (P4T), it is the smallest SolaRoof style greenhouse and its retail price is set to be $10,000. It’s roof part can be ordered separately to fit an existing building (with matching conjunction base of course) or a new wall structure.

Featured with two bubble generators, double-layer covering, and options to purchase the wall panels/door, this product is designed for any small family to test the idea of growing fresh food in their own backyard. They decide what grow system to use. However, for enhancing the capacity to store solar thermal energy, we recommend using hydroponics, aquaponics or better still iAVS sandponics.

Because of its relatively small footing (10 feet x 10 feet), no permit is normally needed and can be set up as a outhouse and for other purposes. 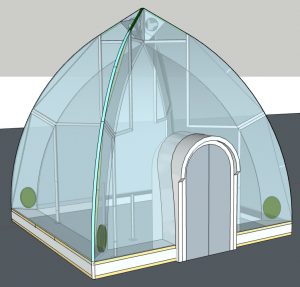 PyraPOD4 Grande (P4G), with a retail price of $7,500 this tent like large building can be set up in a day. It is cheaper than PyraPOD4 Tall because the fabric costs much less than the wall panels and insulation materials. It gives more footing than PyraPOD4 Tall and thus more area to grow fresh food.

Beside hydroponics, aquaponics and iAVS sandponics, vertical gardening is possible using a type of grow tower system. Snow melting system is built in when relatively warm bubbles are produced to replace the old bubbles.

In addition, a simple elevator based on the counter-weight mechanism can be incorporated into the area formed by the four central columns. This way, a person can easily move the central platform up and down with ease. 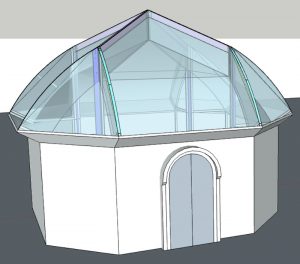 PyraPOD8 Tall (P8T) is set for retail at $75,000 and gives a middle sized family the chance to grow food year around.

Compared to the above smaller versions, this structure is much larger with a wall system. The customer can have the option to order the wall panels and door, or can build them locally with aircrete, straw bale, hemp clay, or whatever they see fit for the purpose.

Its wide and transparent roof system will revolutionize how we build the roof for any buildings out there, large or small. 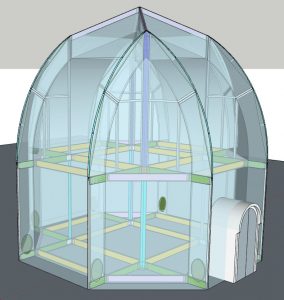 PyraPOD8 Grande (P8G) represents the largest building for backyard install. Suggested retain price is $50,000 which is lower than that of PyraPOD8 Tall due to the same reason of low cost for fabric.

Like its counterpart PyraPOD4 Greande, it is designed for vertical growing with two levels for growbeds or it can fit any vertical grow system out there. Likewise, a simple lifter is an option for easy access to the second level.

Three levels can be easily achieved by digging deep 4 feet and build a 4 foot knee wall. 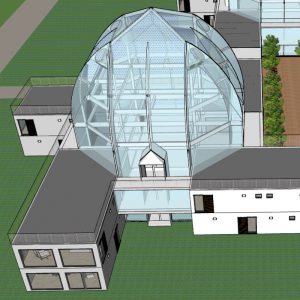 AgriPOD (AP) is a much larger version of PyraPOD8 Grande with double linear footage. As a result, the inner space is roughly 8 times larger. It is designed for small scale farms to grow fresh food for their local communities. Multiple units can be used to scale up the operations.

It can be easily modified to slide in four cube like mini houses at its four corners. The mini houses could be removed and shipped around the world. It is a perfect start for the SolaRoof Village concept for cummunity living. 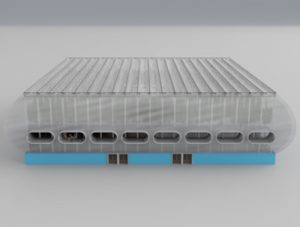 CityPOD (CP) represents the largest flat room SolaRoof structure thant has unlimited expansion potentials and applications. It can be set up for a maga scale farm operations. It shares most of the components of AgriPOD so that the two systems have the same height and cut down the mass production costs.

The same structure can be used for the construction of a supermarket, factory, temporary cover system for winter activities and construction site. It’s applications are numerous. The sky is the limit.