In relation to the public campaigning and activism of the people to stop Monsanto and other Agribusiness and Petrochemical multinational corporations’ political lobby from gaining even more control over seed with GMO technology, I would like to offer the “activist community” a deeper insight into this problem. This GRAIN problem is a disaster for human health and for earth’s ecosystems – not only is GMO a weaponized food, but the use of grain was always about control, impoverishment and enslavement of people (the 99%) and was never about “better nutrition for the masses”. Such ideas about agriculture being a blessing are lies; agriculture was never a “blessing to humanity” – its foundation is the practice of “cultivation” of annual grain mono-crops – with the purpose to yield more grain harvest per acre as compared to the potential harvest from natural, perennial grasslands and thus these crops had strategic value for accumulation and hoarding of this grain “wealth” by the kings of the earth – who stockpiled in the granary this “energy as carbs”, which is what powered the constant warfare of the era of City States. Now, in a civilization of waring Nation States oil is the commodity that fuels warfare. But we must understand the historic warfare value of grain (to feed standing armies), sugar (for explosives) and rubber (for wheeled mobility) that exemplify the true purpose of agriculture and its modern spin-off, synthetic and factory food. 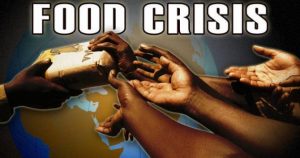 Grain, in the dormant state, is a long-lasting, energy-dense “biofuel” to feed the army on campaigns or to stockpile within the walled city in such large quantity as to be able to outlast a siege by invading armies. The value of grain was never about its nutritive value but only its “shelf life” and concentrated energy value – to fuel the burst of energy to fight in battle. And therefore, vast standing armies could be maintained, with young men dying as a sacrifice to the few powerful lords, who’s desire to rule over men, using force became an unbounded addiction.

Power over the people became the core value of our civilization in pre-history and the system of subjugation of the people by the kings was best served by taking people out of their natural way of life in the forest and forcing them to inhabit the deforested lands around the castle walls to toil in slavery in the fields and for a few to live in servitude within the castle or city walls. Under the declaration of law, the “landless” commoner was forced to produce the crops of annual grain – and to endure lives of poverty and illness. This unnatural regime resulted in the shortening of life expectancy and the exhaustion of the lands. Annual grains have shallow root systems and cannot compete with stronger perennial meadow plants unless the land is injured (fired and tilled). These crops never give back to the formation of the soil, and when they are grown year after year the soil is destroyed. In modern times crop rotations have been abandoned with recourse to synthetic fertilization – in a relentless extractive process until the land is made into a desert. Now we can see from satellite images of the planet the vast scars on the land that have been inflicted by past civilization – by kingdoms long lost into the dust of history. These vast regions of deserts and the terrible droughts now threaten the earth’s ecosystems as they expand to encompass much of the subtropics and temperate zones – altering climate through a long process that begins with deforestation. This is a systematic warfare upon the earth itself, which is conducted for the sole purpose of accumulation of excessive wealth and power by the few, elite, and powerful, who now hide behind the cloak of invisibility that is afforded by the “person” of the multinational corporation.

The control and manipulation of we, the people, so long subjugated and separated from nature’s abundance and forced to live in this system of slavery and exploitation had its beginnings in violence and only force and threat of life and limb of loved ones would be sufficient to subdue the people to this plan of domination. The ongoing die-off of the healthiest and capable of young men in battle that is glorified as a sacrifice to the glory of the king became a systemic pattern that allows civilization as we know it to rule over all the people of the world.

The natural wealth and biodiversity that easily sustained humanity in our legendary “happy hunting grounds” of pre-civilization was and continues to be intentionally destroyed and the “subjects” of the kingdoms are forced, educated and conditioned to live in a state of oppression – in poverty and hunger in the deforested lands surrounding the fortress City, where people toiled to produce the grain for the treasury and serve the powerful few. The people were denied rights and freedoms of movement and prohibited from access to the forest and they became herders of the kings’ animals on the vast grasslands or to do the punishing work of tearing up the soil to plant the annual grain crops – or to slave in the city. All this toil to have a meagre portion for their daily “bread” of subsistence. If one rebel might “steal” from the king by going into the forest for food, then the whole family or the whole village might be destroyed in punishment. Over generations our staple food became flour made from the grain from the treasury and the seed-grain for the next season’s crop was controlled by king who therefore, if there was rebellion, could manipulate the people with the threat of starvation. The people over millennia have lost their knowledge of native and natural food and only agriculture skills remain for civilization to sustain its food supply. Concurrently, the poor health afforded by this unnatural diet and the unhealthy way of life of living with a broken spirit is the cause of unusual human population growth due to this being the instinctive response to our insecurity.

Our natural food, before the advent of “civilization” did not include grain. Certainly, the very short life expectancy and poor health and vitality, as well as much of the diseased condition of life is due to a subsistence life in the “no-man’s land” surrounding the castle, while within the castle the king, his family and clan and those in his company lived a life of excess that includes feasting on the domestic livestock and wild game of the realm. All “stock” was declared a possession of the king and the people were prohibited from hunting in the forest. People themselves were also decreed to be property of the crown and the rights granted to individuals could be revoked without any process. The few elite created a law of capital, not justice, to constrain the arbitrary powers of tyrants – meaning that the legal system emerged as a code of ownership & property rights that are not founded on the inherent “rights” of any person. In fact, the concept of “divine right of ownership” by the king and his lords is a grant to exploit people as property without any limitation.

How can we comprehend the millennia of suffering that has taken its toll on our human condition by systematically impoverishing the vast majority of people, until now there is a deeply conditioned expectation that poverty is part of life? For those born into life on the other side of the poverty/wealth gap, they can only feel that their “good life” is won at the loss and suffering of other people. It is time to see that both have been trapped in this system that sustains itself due to a great addiction to holding power over people and over nature. It is time for a new vision to emerge and to take hold of our collective imagination, because the power to enslave and exploit no longer is sustainable. This system was born out of violence, matured as vastly destructive contest for control through abuse of power, but has now entered the endgame of exhaustion and collapse. While there may be no limit to the exploitation of people, the earth has its limits and the resources that sustain the concentration of power are so depleted that the agriculture food system, now so industrial and mechanized, will fall into crisis soon and within one generation the whole world population will collapse – when more than half of the projected population of 9 billion people will die in overwhelming crisis and suffering.

This death sentence that has been imposed by a system benefiting only an elite few of the human population can be averted by the new WE emerging with heart coherence and cross-cultural understanding. Such transition must be enabled by removing the fear at the core of our conditioned dependency on the system that is failing – this is a fear of scarcity and the antidote is to know and experience directly that scarcity is a lie and that abundance is accessible to all. Our reconnection with nature, now enhanced by a modern, scientific understanding of nature’s ecological life support systems will reveal our co-creative capacity to work with and enhance Nature’s abundance. Closed environment growing systems are enabled by Sola Roof, and together with other eco-innovations, these solutions can prove to be so successful that poverty, hunger, bad water and scarcity of energy will be banished into history. With all of humanity living thriving, prosperous lives, there will be no resource scarcity “problems” to push people into conflicts and communities can enjoy the great savings to be had by elimination of warfare. The whole of humanity can shift their attention to the healing the damage ecosystems and billions of families will work together for the restoration of diverse wildlife in all bioregions of the earth. We are at this tipping point now and human creativity and inspiration is able to create the solutions, like AgriPOD, that will act as the catalyst for this incredible global paradigm shift.

However, there is the risk of tipping the other way into a future that will spiral into eco-collapse, scarcity, overwhelming crisis and runaway climate change that will result in worldwide conflict on a scale never seen in our history of warfare. Going in this direction, we can anticipate in the best case, that a human die-off take the life of about half of the human population and in the worst case the scenario can produce an extinction event that brings “life as we know it” to an end due to the compounded negative impacts that humans will inflict on the living earth. Therefore, it is imperative to accelerate all available solutions more quickly towards viral adoption and the PODnet global movement for intensive localization of Food/Energy/Water – FEW4All – will serve as a catalyst for the needed global transformation – a paradigm shift that must engage every family as we work together for local to global change.

“Sometimes it falls upon a generation to be great. You can be that great generation. Let your greatness blossom…. do not look the other way; do not hesitate. Recognise that the world is hungry for action, not words. Act with courage and vision. – Nelson Mandela” (2005 “make poverty history” speech, London)