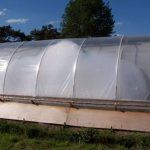 As we mentioned on homepage, SolaRoof is the core and soul of PyraPOD, with the latter being the application of the former. The reason is, although the physical shape can be any structure you see on the right or left of this page, each of them adopting SolaRoof (click to see larger image), the core principle remains the same. 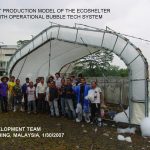 In a nutshell, the name says it all. SolaRoof carries at least two meanings: (1) Solar Roof – in this sense it is like a passive solar greenhouse to capture the sun light as much as possible. However, capturing solar energy is not enough, storing it and using it to create a comfortable zone are far more important. This solves the issues a traditional one-layer greenhouse fails to do: too hot during the summer or winter day, or too cold after the sun is set. Which leads us to the next point… 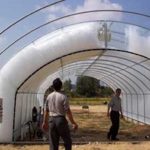 (2) SolaRoof also means Roof Only – the whole building acts as a roof. We seem to have a contradiction here: doesn’t more light in mean less insulation (normally measured by a heat resistance factor or the so-called R value)? The same for the reverse: a higher R value means less light transparency. This is what most current greenhouses do– by having opaque walls and roof, with rather small windows–they better keep the heat within. With this come a whole host of problems, such as need for good air ventilation and temperature control. 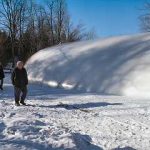 All these problems can be solved by doing the SolaRoof way, which uses water as the thermal mass to store heat and reduce the greenhouse’s inner temperature. Then comes the best part: add soap into the water to form a liquid soap solution, then use a fan to blow massive amount of tiny bubbles. These soap bubbles are wonderful insulator for nights and the winter, and also the best shade for day time and the summer. The heat storage capacity can be further increased when we incorporate aquaponics (growing plants and raising fish together in a symbiotic system) into the system. iAVS sandponics is even better, using sand as growing medium rather than soil. When the liquid soap tank and the fish tank are buried lower into the ground, the effect is cooling of interior air by transferring heat into ground. As a result, the thermal energy collected and stored during the day happens to be just enough for the night use. That is what the inverted pyramid means in our logo. 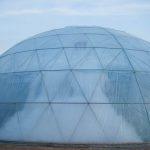 To accomplish all of the above, we use two layers of transparent membranes as the covering. More importantly we dynamically fill the cavity with soap liquid bubbles. 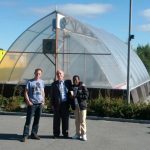 While water vapor will condense to form its liquid phase, water, we have found a dynamic phase between the above two phases: using soap bubbles. Here the magic happens. Contrary to the vapor-water phase transition, transformation between soap bubbles and soap liquid does not trigger or involve a heat gain or loss. With a water pump and an air fan, we can blow bubbles and fill the cavity. That’s it. Easy Peasy! Watch it in action in this video:

You see, soap bubbles fill the entire cavity and insulate every corner and space to form a canopy just like the atmosphere around the earth. You bet what will the inside be like when you have a highly insulated and sealed barrier all around, left and right, up and down. As a rule of thumb, an inch thick of soap bubbles will be equivalent to a heat resistance or insulation property of R1. If the double layer cavity is two feet or 24 inches in thickness, then we can achieve R24 easily with only soap bubbles trapped in between two poly films.

What will happen when the sun rises and especially in summer time when the inside is really hot and you wish there is shade? Take a look at the following image showing how bubbles can give you just that. In addition, geo-liquid supplemental thermal heating/cooling can also be easily incorporated into the picture as shown here:

As you see above, beside having a thick layer of bubbles as shade for the south side, we also have a thin film of soap liquid flowing down on the north side. While the south side gives us the bubble shade needed and the north the max indirect sunlight exposure, both sides still have the capability of absorbing solar thermal energy and storing it in water – this is also a cooling effect when we do not want the inside to be too hot. This way, the extra solar thermal energy we do not need during the day is stored, to be used readily after sunset.

The following shows the changes in four temperatures recorded when bubbles were first introduced to the cavity, indicating the liquid soap bubbles quickly “chill” the temperatures inside both the cavity and the greenhouse: 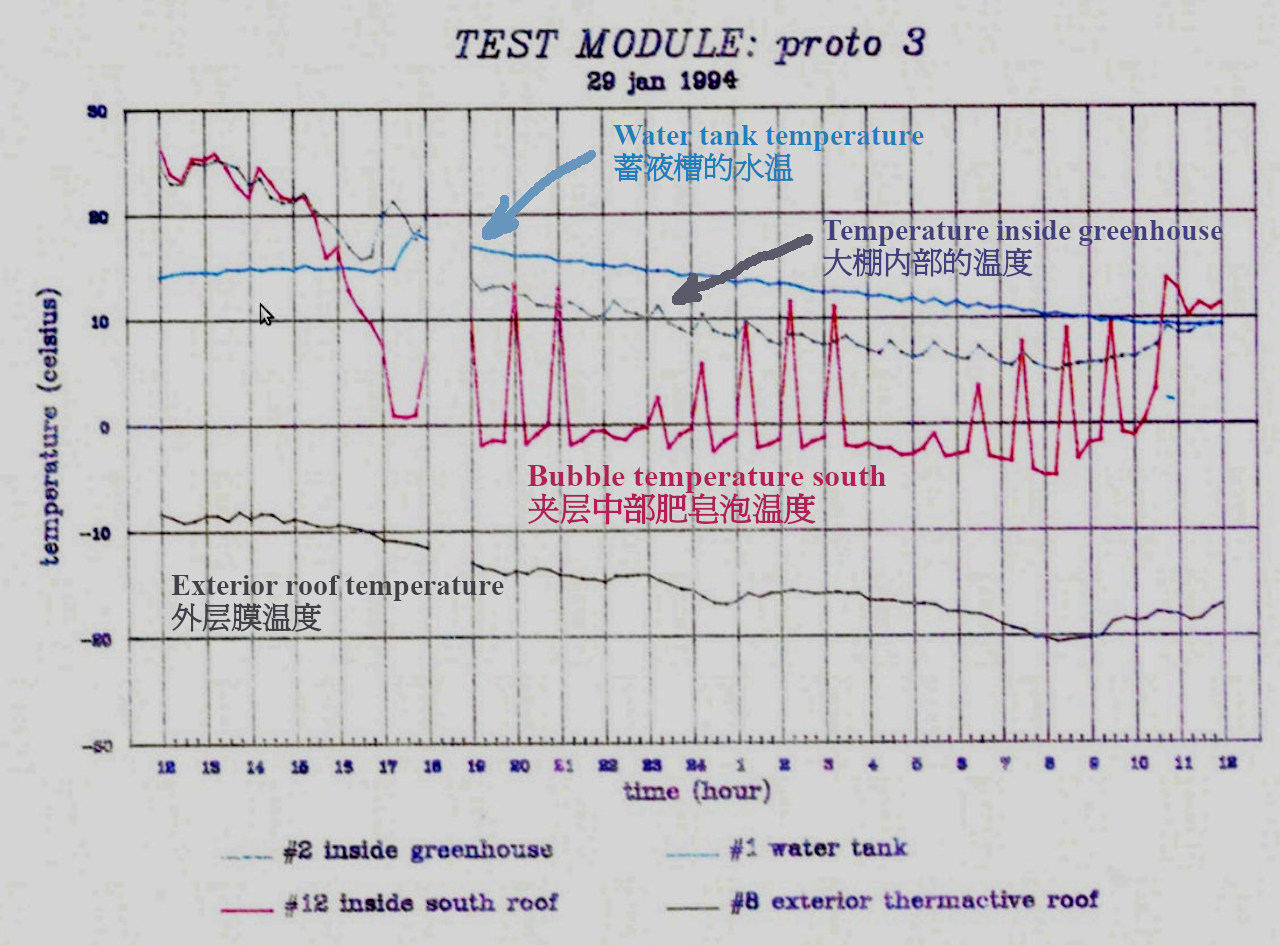 This second one shows the temperature changes within a full day and night, when the operation was under full control without idling in the first place: 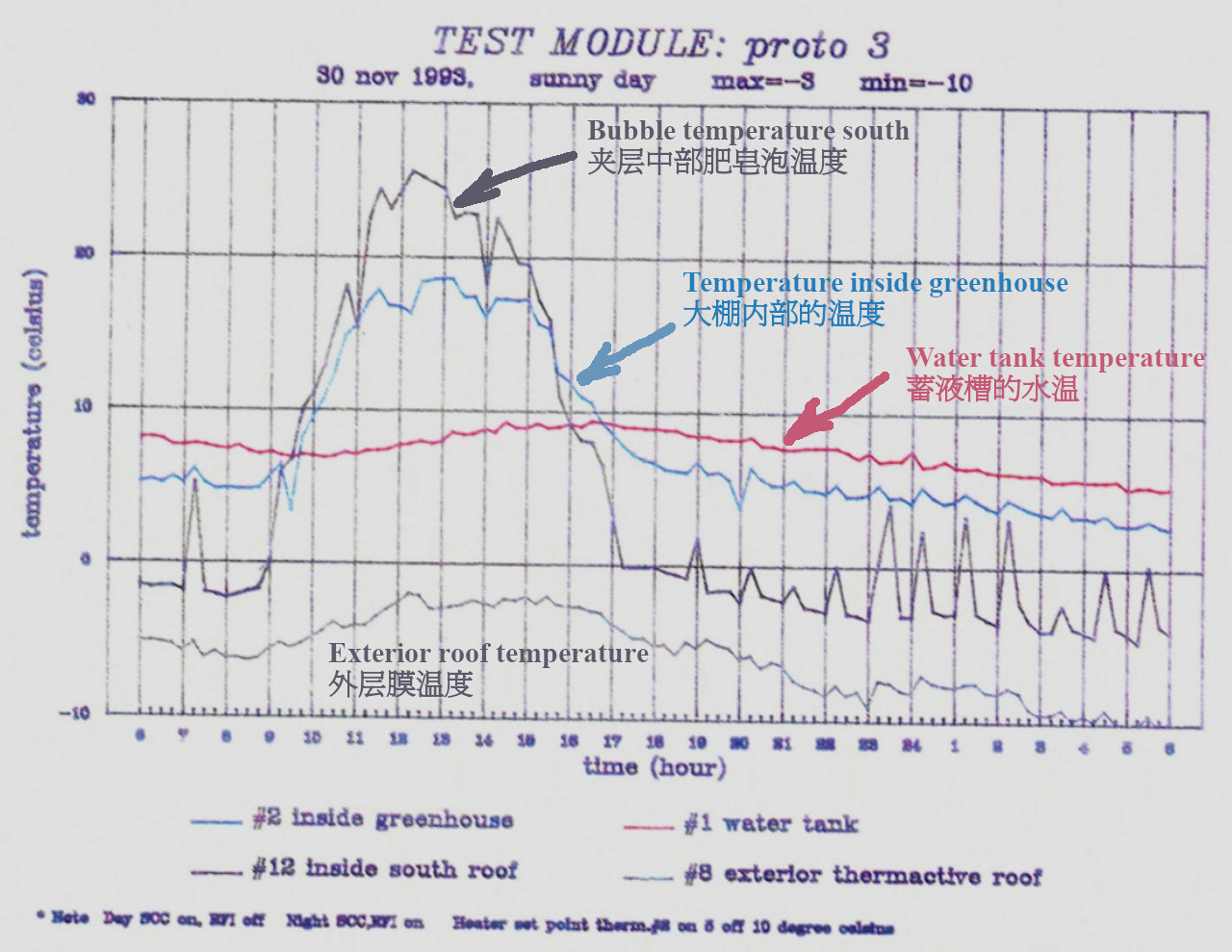 The extensive plant leaf canopy within PyraPOD transforms solar energy by two principal bio-processes: (1) photosynthesis creating carbohydrates, and (2) transpiration (plants giving off moisture mainly through its leaves) creating water vapour. 100% of the solar radiation is thus captured and transformed and cannot cause overheating in the closed, controlled ecological environment.

The inner skin temperature of the double layer building envelope is controlled by a thin flowing liquid film that is drawn from an on or in-ground storage tank and circulated to the roof and wall areas that are chosen for removing, by condensation, the “latent heat” of the transpired vapour such that solar thermal energy is never converted to overheating as happens in a conventional building. 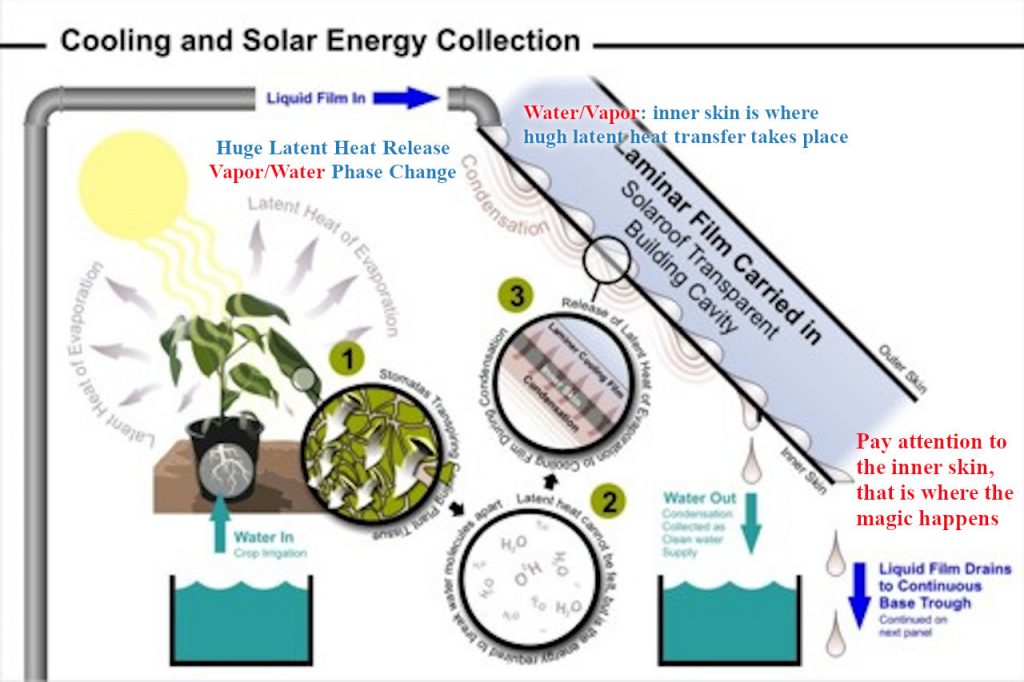 If you can foresee it further, a simple setup like this can literally achieve at least the following 7-in-1 functions: 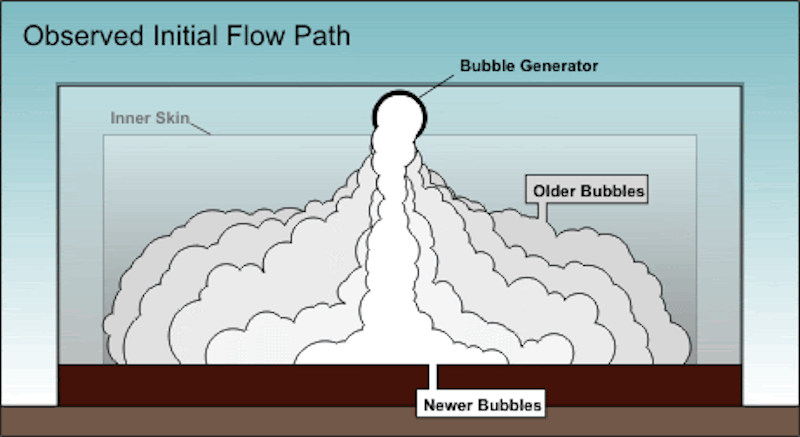 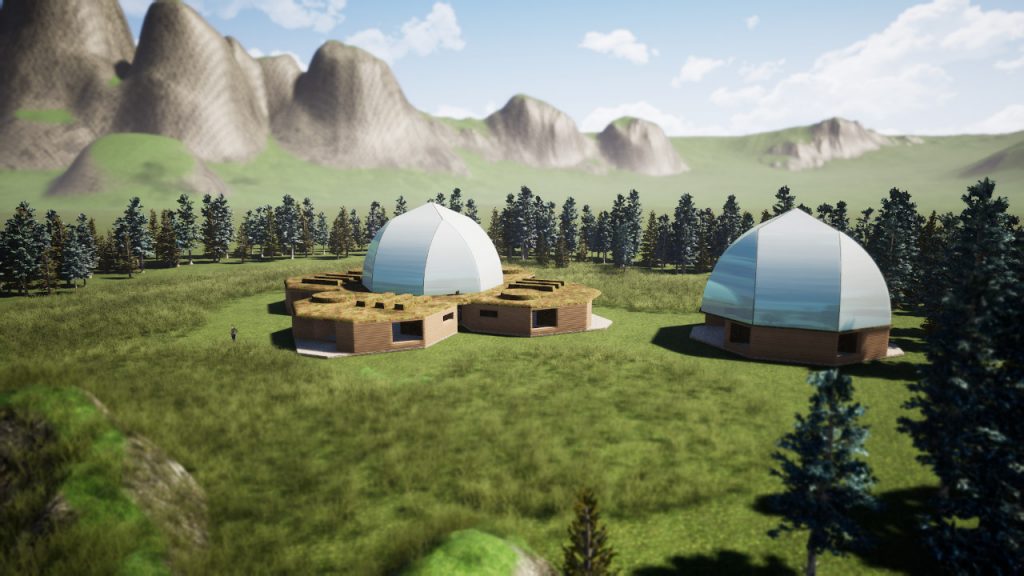